It’s Magic: How Tree Houses and School Buses Have Sparked a Love of Reading

Do you remember the books that made you a reader? What were the first books you had to have each time a new one came out; the books that you traded with your friends and discussed endlessly? For me, it was the Baby-Sitters Club. I remember my grandparents buying me the first book, and after I loved it, they bought me the next two. After that, every time they’d pick me up from school and we’d go to a bookstore, I’d race over to the shelves, hoping to see a new addition or two to the series. If there were no new BSC books, I’d choose a different book or try a new series.

Sure, there might have been books before those (I’m sure there were), but that’s the first time I can really remember being a part of something larger with books. The shared love of the series with friends of mine created a bond that eventually spread beyond just BSC books — and even today, 35 years later, some of these friends and I still message on social media about books we’ve read and share them with each other. There’s something to be said for that.

If we’re lucky enough, we have that first series that was the catalyst for a love of reading. For my son, it’s been the Magic Tree House and the Magic School Bus series.

The Magic of Jack and Annie

There is a generation for whom Magic Tree House was their gateway path into reading, but I am not of that generation. It seems that I just missed that cutoff and am a little too old to have been part of that. No, I came to it late…as in recently, like this year, 2022, because of my 6-year-old son. 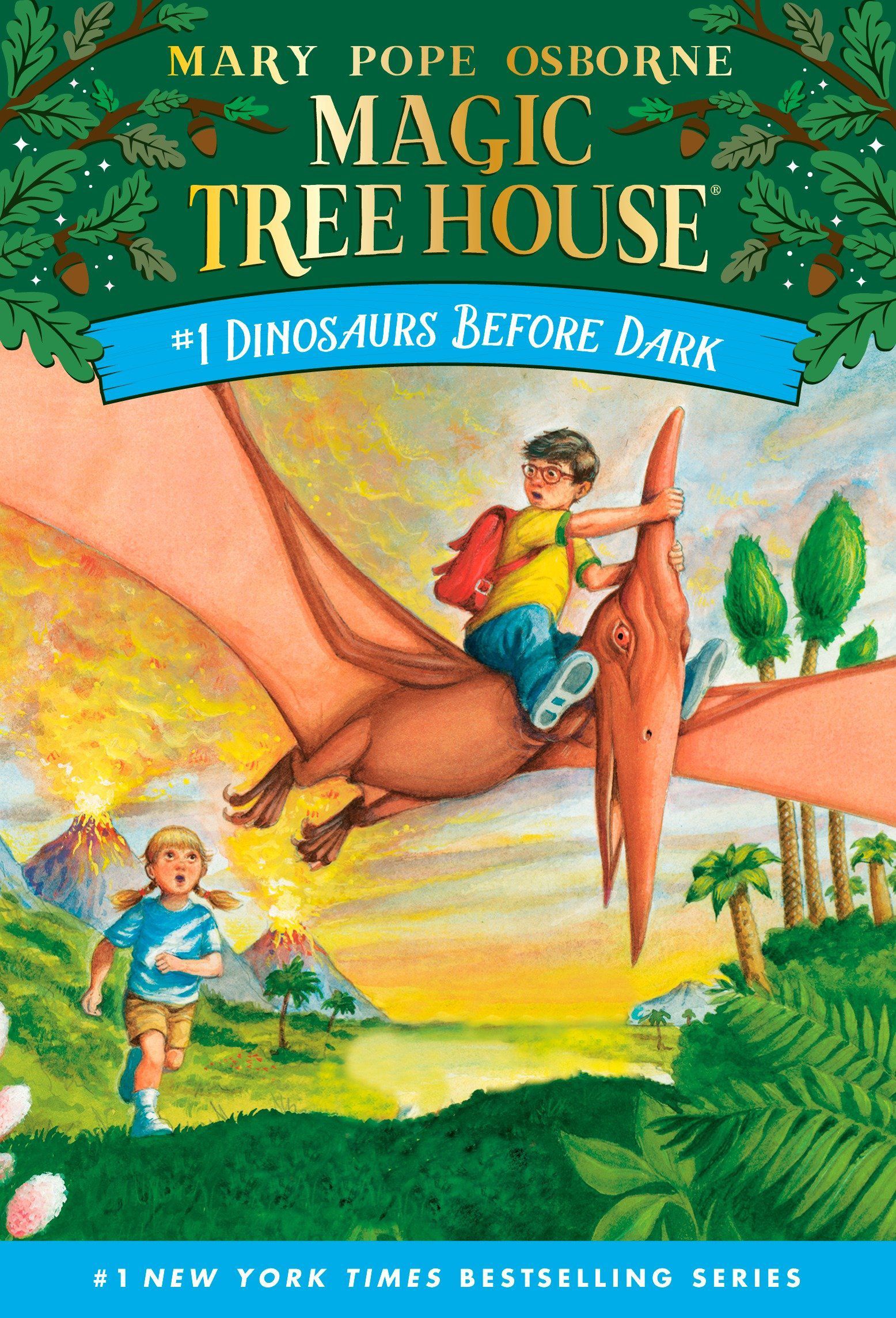 It all started out so innocently: I was looking for a fun unit study for my son, and I saw that there was a Magic Tree House unit study available. It involved reading each book, doing some worksheets on each one, supplemental games and books, and related television shows/movies one could watch. While we don’t do all of that, I thought to myself, great! There are like a million of these books, it will be perfect for the summer. So I found a boxed set of the first 30 or so books and bought some others, and we were set.

Then I realized there were also the Fact Tracker nonfiction books that went along with each book. And there was a website. There are also the Merlin Mission books, for more advanced chapter book readers, some graphic novels, some activity books…there is a whole Magic Tree House universe out there. IYKYK, amirite?

The original series (as opposed to the Merlin Missions) is geared toward beginning chapter book readers. They’re short books, with black and white illustrations, and basic, if not somewhat repetitive, language. (The repetition is intentional, as it helps build reading skills). Despite that, they manage to illustrate a magical world where siblings Jack and Annie have a magic tree house that takes them through time, with each book focusing on a different time and place, like the Wild West, or Ancient Egypt. The first book was published in 1992, and Mary Pope Osborne is still writing them today.

If you browse Instagram posts, read blog posts about reading, or look at any teaching or homeschooling message board, eventually you’ll see more than a few people talking about how much they loved the Magic Tree House series growing up, and how the books sparked a love of reading or an interest in history for them.

Pope Osborne started to realize how the series was a catalyst for kids to branch out to other chapter books, and as she traveled around the country meeting fans and students, she learned that schools with a high poverty rate couldn’t access her books easily. So she started a program for Title I schools, where teachers apply for the program, and if the school qualifies, she donates books to every child. Each time she visits a school, she hands out books to the students. “…I realized I was reaching an audience I’d never reached before…There was something about these rather simple books that was catching fire with young readers.”

Reading with my son, I can see that. We are on book 11 so far, and average at least one book a week. Sometimes we have the nonfiction Fact Tracker, sometimes we don’t. But what I’ve noticed is that no matter what time period we’re reading about, my son always wants to learn more about it, whether it’s via YouTube or Nat Geo, or the Fact Tracker. I’ll catch him reading the books on his own, or looking at books down the line in the series. These books have that certain something for kids that bring history to life and get them interested in it. It’s been fascinating to watch.

I was a little wary at first — will the books hold up 30 years later? Is there anything offensive? So far, they’ve not only held up, but they’ve been surprisingly good. There has been nothing that jumped out as problematic in them (again, we’re only on book 11), and I’m impressed with their timelessness. They have been a much better classic choice than, say, the too-often-relied-upon classics of the Little House series. (Spoiler alert: they don’t hold up…at all).

Ms. Frizzle and Me

Another seminal book series from the ’80s and ’90s that I somehow missed the first time around that has been super influential on kids — and continues to be so — is the Magic School Bus. The books, written by the late Joanna Cole and illustrated by Bruce Degen, were first published in 1986, and feature the ever-amazing Ms. Valerie Frizzle, an elementary school science teacher who has a magic school bus that takes the children on field trips through the human body, to the bottom of the ocean, to space, among the clouds, and more.

In addition to the original series books, there were chapter books, early readers, TV tie-in books, a nonfiction companion series called Magic School Bus Presents, and Liz, the class lizard, even got her own series. There was also a short spin-off series, Ms. Frizzle’s Adventures, first published in 1991, that focused on social studies — but that didn’t take off as much.

The original television show based on the book series ran on PBS from 1994 to 1997, and featured Lily Tomlin as the voice of the Frizz — and who wouldn’t want Tomlin as their science teacher? It was also partially funded by the National Science Foundation, and according to PBS, it was the first fully animated science show. It ran on various channels until 2012, making it the longest-running children’s science show. Scholastic saw the series as another way to reach out to students who may be “steered away” from science, especially girls and BIPOC students.

In 2017, The Magic School Bus Rides Again debuted on Netflix, with a second season in 2018, and several specials since then. The continuation series has the Frizz getting her PhD and retiring from the elementary school, and her younger sister Fiona Frizzle taking over (with Kate McKinnon voicing Fiona).

Let’s just say that while it’s still a great show, it’s not like the original. The animation was a notable departure, with many viewers commenting on how Fiona Frizzle looked much more conventionally attractive and feminine, not as quirky, and much less Jewish than her older sister Valerie. Tim and Keesha, the only two Black students in the class, have much lighter skin and a different hair texture than they did in the original series. Ralphie is thinner in the reboot, Wanda looks whiter, and Arthur’s hair and freckles have been tamed considerably.

I don’t know when I first discovered this show — maybe shortly before the pandemic? My son started watching it, and I fell in love with it. The way it brought science to life and broke down complex concepts into things kids could understand, the quirky characters, and of course, the dresses the Frizz wore, all made the show super fun to watch. The original books took a little longer to fall in love with — I think they’re a little busy, with the main story and then all of the factual information scattered all around on the page — but I loved the early readers and chapter books. Slowly, the “picture books” (for lack of a better word) grew on me, and we’re slowly building up our collection.

Like Magic Tree House, the Magic School Bus show and books have drawn my son into reading, but also been a catalyst to learn more; this time in the area of science. We have a summer camp unit inspired by the Magic School Bus where we watch an episode or two of the show on a subject area, read a book or early reader, do a science experiment, and explore educational videos to learn more. Ms. Frizzle’s famous catchphrase “Take chances, make mistakes, get messy!” has been our homeschool motto for a while now, and reminds us of how wonderfully chaotic and messy learning can be.

Children aren’t the only ones still loving the Bus, though — grown adults still dress up as the Frizz for Halloween, teachers (science and otherwise) on Instagram quote Ms. Frizzle and talk about how she’s inspired them, and during the early months of the pandemic, even parents channeled the inventive educator for their home teaching. Despite the show not having regular new episodes and the books not being regularly published, it remains a popular series and an inspiration to adults and children alike. The newest book, The Magic School Bus Explores Human Evolution, was published June 2021. Cole died in 2000, and no plans for another author to take over have been publicly shared.

Though I somehow missed both of these series the first time around, it’s been such a learning experience to read these alongside my son, and exploring topics with him. Seeing how these book series have created such a passion in my 6-year-old for history and science is kind of…well, to use a recurring theme…magic.

What series have sparked your love of reading?

If you’re wondering about other early chapter books that might be options, we’ve got you covered — and check out this post for fantastic quotes from Ms. Frizzle.