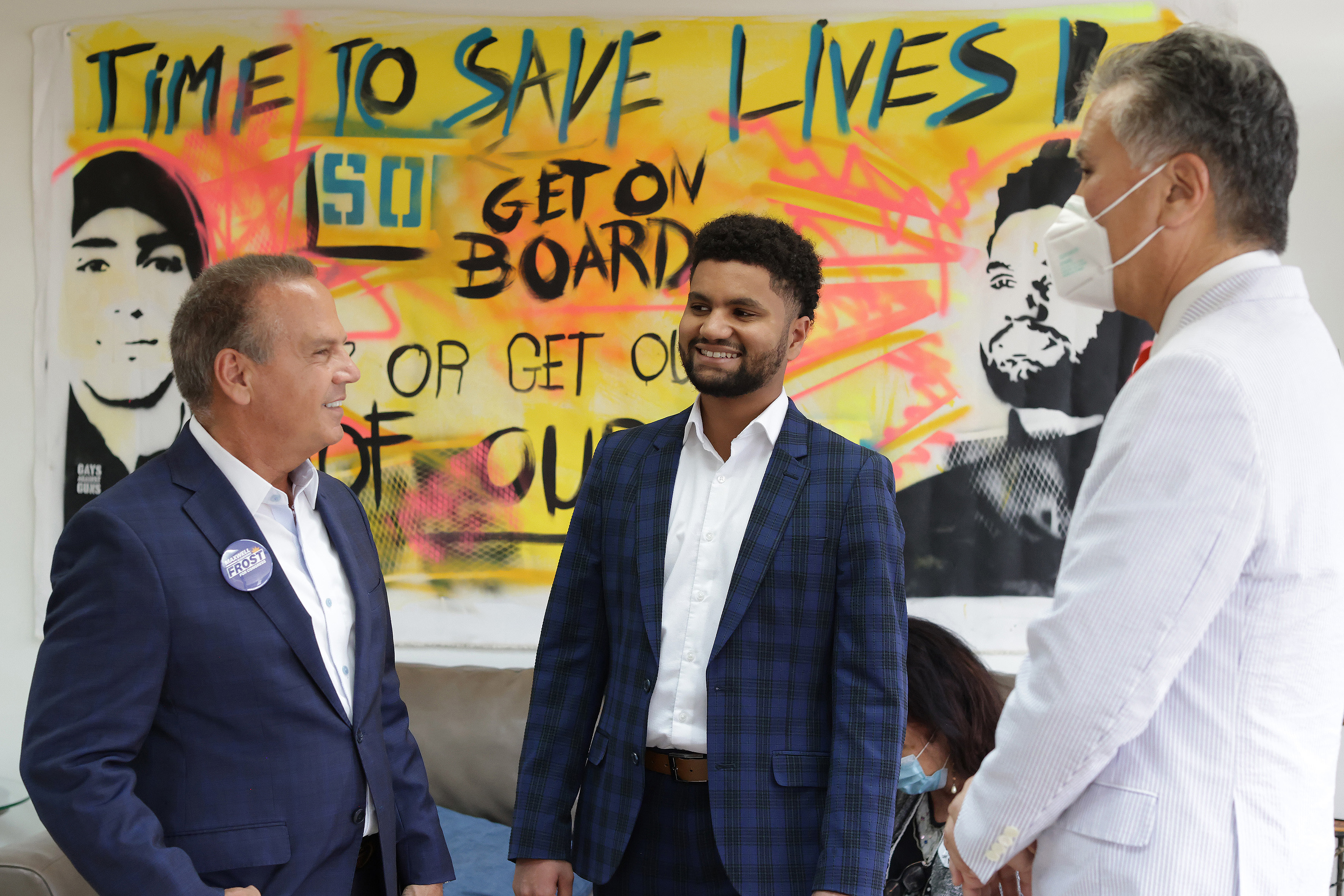 TALLAHASSEE, Fla. — Maxwell Alejandro Frost, a 25-year-old Generation Z activist and occasional Uber driver supported by progressives, is just one of more than a dozen candidates who are poised to head to Congress after Tuesday’s primaries.

The list also includes Cory Mills, a defense contractor and skeptic of the 2020 election results who won a bitter GOP primary.

Republican Gov. Ron DeSantis overhauled Florida’s congressional districts after he muscled through a new map that increased the number of GOP-friendly districts. It means that many of Tuesday’s primary winners are expected to easily win the general election in November.

Several Democratic incumbents — including Reps. Val Demings (D-Fla.) and Charlie Crist (D-Fla.) — are running for higher offices, leaving their seats up for grabs.

Frost, who picked up endorsements from Sens. Elizabeth Warren (D-Mass.) and Bernie Sanders (I-Vt.) and raised the most money among Democrats in the race, won the Democratic primary to succeed Demings in a crowded race that also featured state Sen. Randolph Bracy as well as former Reps. Corrine Brown and Alan Grayson. Grayson made waves when he publicly confronted DeSantis over gun violence when the Republican governor was appearing with a conservative political commentator in Orlando.


Frost will make history as the first member of his generation in Florida to make it to Congress if he wins Florida’s 10th congressional district, as expected in November.

“It’s hard to wrap my head around,” said Frost in a phone interview. “We have been campaigning for a year. We still have a lot of work to do and I’m not going to take the general election for granted.”

Anna Paulina Luna, who unsuccessfully challenged Crist in 2020, won the GOP primary again for Florida’s 13th congressional district. Luna, who had been endorsed by former President Donald Trump, withstood a furious challenge by Kevin Hayslett, who had picked up the backing of former Trump security adviser Michael Flynn as well as top Republicans in Pinellas County, including Florida House Speaker Chris Sprowls.

Luna will be square off against Eric Lynn, who once worked for President Barack Obama’s administration. The seat, however, now tilts Republican after redistricting. Trump won the reconfigured district in 2020 by more than 7 percentage points.


The Pinellas County race was the most expensive congressional primary in the state, according to an analysis done by AdImpact.

Laurel Lee, who stepped down as Florida’s top election official earlier this year, won the Republican primary for Florida’s 15th congressional district, beating back rivals state Sen. Kelli Stargel and state Rep. Jackie Toledo. The seat was newly created during redistricting since Florida picked up a 28th congressional seat due to population growth.


The race included a flurry of negative ads, many of them paid by super PACs. But the negative tone of the contest came nowhere close to matching the onslaught in the race for Florida’s 7th congressional district, which includes suburban areas near Orlando. That contest included Mills and conservative state Rep. Anthony Sabatini, who had the backing of Rep. Matt Gaetz (R-Fla.), and clashed with state House leaders who he labeled “RINOs” or Republicans in name only.

Mills, who has publicly stated that he believes that the 2020 election was rigged against Trump, defeated Sabatini on Tuesday, a loss that Sabatini on Twitter contended was a win by “the Swamp” that paid for “a $1.6 million influx of fake news pieces in the last 14 days.”

The seat is currently held by Rep. Stephanie Murphy (D-Fla.), who chose not to run for reelection in advance of the district becoming altered due to redistricting.

Jared Moskowitz, who had been DeSantis’ state emergency management director, won the Democratic primary for Florida’s 23rd congressional district, blowing past opponents who had questioned his ties to the governor. State Sen. Annette Taddeo — who briefly ran for governor — won the primary for Florida’s 27th congressional district, setting up a match with incumbent Rep. María Elvira Salazar (R-Fla.). Democrats have targeted this race as the one GOP seat they may be able to flip in Florida.


Most incumbents seeking reelection easily won their primaries, including Gaetz, who brought in top GOP celebrities including Donald Trump Jr. to campaign for him in his conservative Panhandle district after his primary opponent spent roughly $500,000 on ads that ripped into Gaetz, who has been under federal investigation for sex trafficking. Gaetz has denied all wrongdoing and has not been charged.

Another incumbent who won — GOP Rep. Daniel Webster — survived a bit of a close call in a primary from Laura Loomer, who came within a few thousand votes of toppling the 73-year-old veteran. Loomer is a far-right activist who has been kicked off social media platforms. She ran against Rep. Lois Frankel (D-Fla.) in 2020 in a South Florida race, but this year she challenged Webster, a long-time incumbent who became the first Republican to serve as Florida House speaker since reconstruction.

Webster ultimately prevailed in the race, but only because he outperformed Loomer in Orange County, his long-time political base. Loomer bested or nearly matched Webster in the two counties that are home to The Villages, the GOP bastion of the state.