A jury has convicted two men for conspiring to kidnap Michigan Governor Gretchen Whitmer in 2020, ending a sensational case which made headlines nationwide and initially resulted in a retrial.

Adam Fox, 38, and Barry Croft Jr., 46, were both found guilty of conspiracy on Tuesday for their roles in the kidnapping scheme, as well as for attempts to use a “weapon of mass destruction” after the plotters tried to obtain an explosive device before their arrest in 2020.

Prosecutors claim the accused planned to blow up a bridge in order to divert police attention as they abducted the governor from her vacation home, though their plot was foiled after at least 12 federal informants and agents infiltrated the group.

Whitmer, a Democrat, celebrated the outcome later on Tuesday, saying “Today’s verdicts prove that violence and threats have no place in our politics and those who seek to divide us will be held accountable. They will not succeed.”

Two other men, Daniel Harris and Brandon Caserta, were also previously indicted for conspiracy and charges related to weapons and explosives but were acquitted last April. The same jury could not reach a verdict on Fox or Croft, however, setting the stage for a second trial.

Accused co-conspirators Kaleb Franks and Ty Garbin, meanwhile, pleaded guilty and testified for the prosecution. Garbin has been sentenced to six years behind bars, while Franks is still awaiting sentencing.

The group was allegedly motivated by anger at the governor’s Covid-19 policies and spent time practicing military tactics together in preparation for the abduction, though defense attorneys insisted the kidnapping plot was “utter nonsense” and that the governor was “never in any danger.” 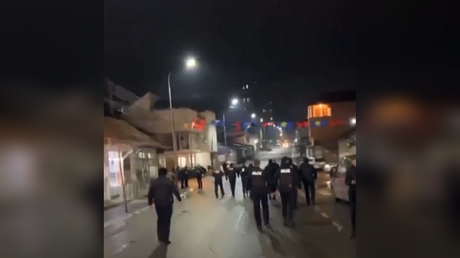